※日本語版は、こちら。
This employee interview is with Atsushi Wada, the head of LINE Fukuoka’s Development Department. Mr. Wada has watched the continually expanding department grow to almost 60 members since the company’s founding. He recently told us about LINE engineers’ mindset and the department’s structural culture from the viewpoint of holding an in-house “Hackathon” at the end of last year. 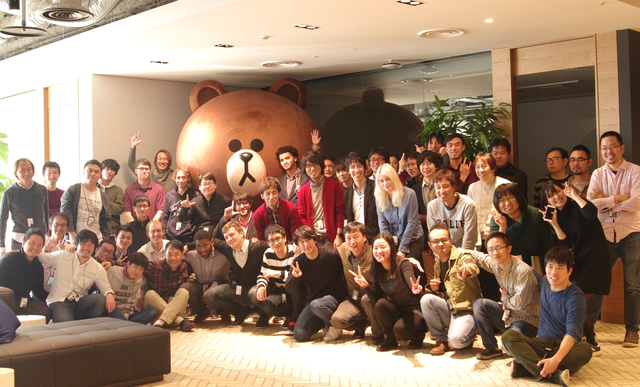 About My Current Work 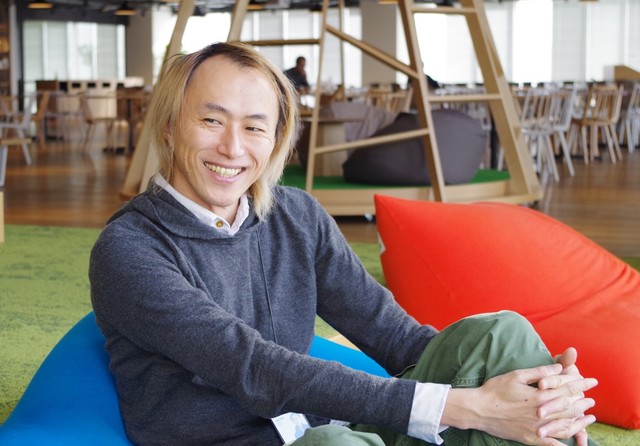 ※Interviewee: Atsushi Wada, Development Department Head
I preside over everything from managing the progress of projects currently underway in the Development Department to the acquisition and assignment of staff needed for each project we’re entrusted with.
I’m also trying very hard to create an environment in which engineers can comfortably pursue their work that is capable of supporting a stance towards independent, individual training. As part of these efforts, I organized an in-house Hackathon at the end of last year.

About Our In-house Hackathon

▼ What is a Hackathon?
“Hackathon” is a combination of the words “hack” and “marathon”. “Hack” is slang used by computer technicians, and I think the most fitting Japanese translation would mean something along the lines of “to do something clever”. In a Hackathon, engineers do this hacking over a long period of time, like a marathon
Last month, every engineer in LINE Fukuoka’s Development Department (myself included) participated in the Hackathon, creating MVPs (minimum viable products)*.
*MVP (minimum viable product): A product with only the minimum number of features required.
▼ Two Rules
The first rule was that engineers could decide for themselves what they wanted to create, but they had to work in teams. That’s why we started out by having each engineer pitch their idea or product. After listening to everyone’s pitches (which ranged from 15 seconds to a few minutes, with the longest lasting 10 minutes!), people began forming teams with members that they wanted to collaborate with. It was kind of like when start-up companies gather up investors: to get people involved, you need to be persuasive. I believe this is a skill that not only service planners but engineers need as well. 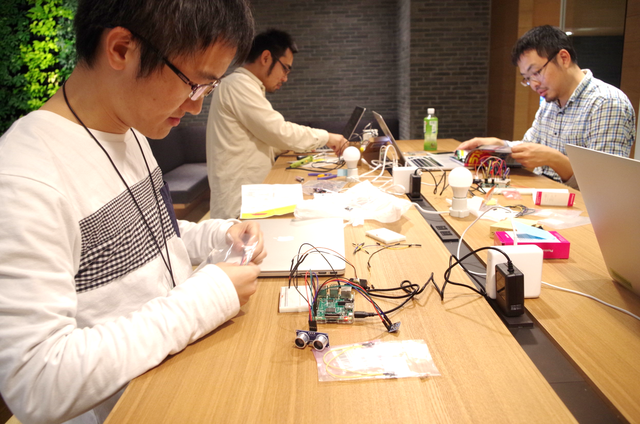 ※Creating an MVP ①
The second rule was that engineers had just 2 days to do the work. Considering factors like which part they should designate their limited amount of time to or what aspects to prioritize are crucial in any job.

Background Behind Doing the In-house Hackathon

Throughout the LINE group, each section sets aside time and funds for activities and events called “workshops” that are done to strengthen team bonds and improve skills.
Up until last year, LINE Fukuoka’s Development Department was still rather small, and we were able to communicate thoroughly without doing any workshops; however, over the course of last year, our department topped 50 people, making exchange outside of product teams more difficult. I felt like it was the right time for a workshop or something similar that would increase our mutual awareness.
Plus I thought that since the entire Development Department would be participating in this workshop, I wanted to make it an workshop that would let us get a glimpse at more individual preferences and share a sense of unity, and what better way than a Hackathon! 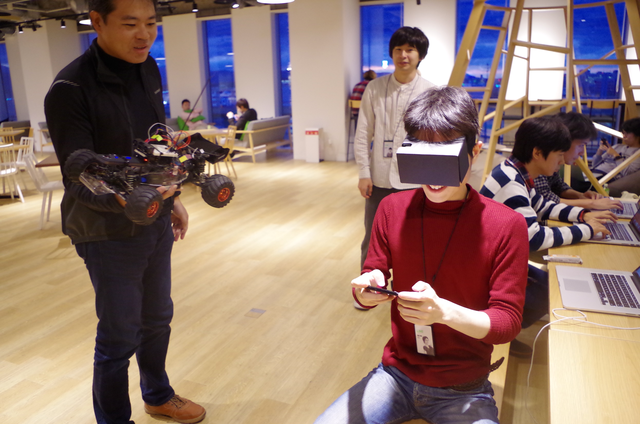 ※During the Hackathon ①
While our internal opinion was that many of our engineers might like a “physically active workshop”, another reason that I wanted to do a Hackathon was because our intention has always been to hire people that would enjoy something like a Hackathon, so I felt the workshop itself was related to the hiring of all LINE Fukuoka engineers, and I wanted to reconfirm that belief.
All of our engineers have a strong desire to learn, are highly inquisitive, and are always striving to absorb new knowledge / technology independently, but they hadn’t been able to test new technology in products or been given an opportunity to take on new challenges, so I hoped the Hackathon would be a good chance for them to do these types of things, too.

Our Engineers During the Hackathon

For the Hackathon, everyone tried to make adjustments to their schedules in advance that would allow them to temporarily set aside their ordinary work and focus solely on the hackathon for two full days. That being said, teams were actually allowed to start working on their product as soon as their members had been determined. As a result, some teams were gathering materials and furiously writing code as early as a month in advance. I guess they were having a lot of fun!
And of course, no team wanted to have their pride hurt by presenting something at the actual Hackathon that didn’t run; apparently there were some teams that met the weekend immediately before the hackathon. Once the products were complete, our engineers began improving them from a user’s standpoint, putting on the finishing touches. 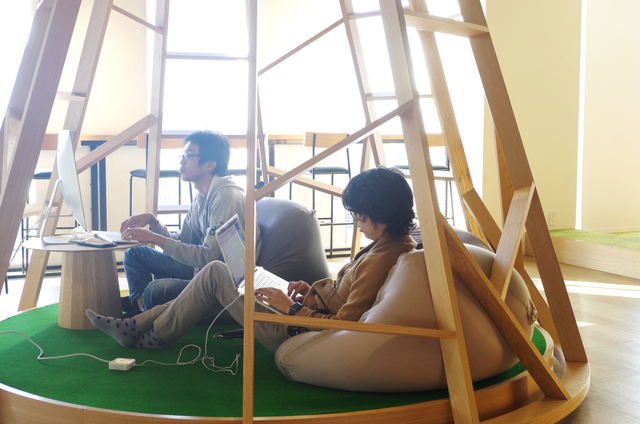 ※Creating an MVP ②
“Technological capability, a love of technology, and an interest in providing products to users as a user” ? these are the traits demanded from LINE engineers every day. These same traits are the axis around which we base job offers, and I think we were actually able to clearly see this mentality during the Hackathon.

Engineers of Various Races and Nationalities

English has really become the norm for daily communication. For the Hackathon, we had those who felt more comfortable do their presentations in English, which made up about one-third of the presentations. 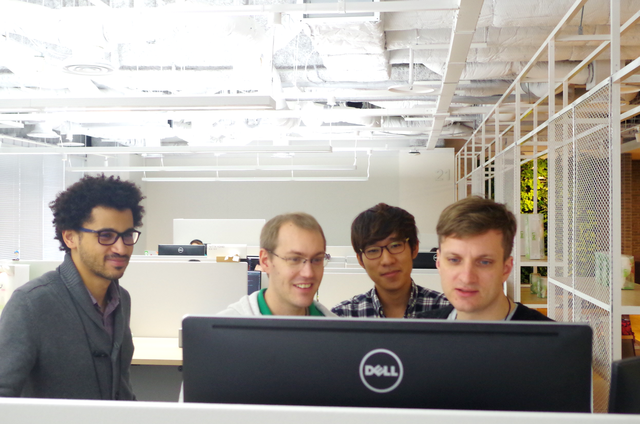 ※During the Hackathon ②
Currently, about half of the engineers in LINE Fukuoka’s Development Department are from overseas, giving us a very international feel. While we haven’t gone out of our way to hire expat engineers, many of our applicants (regardless of nationality) have confidence in their skills when they apply for a position, creating a trend that makes it easier for them to successfully enter the company.

In order to adapt to these changes, the company now offers support in the form of interpreters, post-entry Japanese language lessons, etc. The fact that we promptly put a support structure in place may be another reason why engineers from overseas are on the rise.

In total, 13 MVPs were presented at the Hackathon. They were all interesting, but for example, the “StyleTransferNet for RealTime” product (which enables the dynamic rendering of videos) was really special in that it not only tried to use the comparatively new style transfer algorithm, but also a process that migrated from a fully client side implementation to one that leveraged a server side component.（Details: LINE Engineers' Blog Real-time style transfer and its future）.
* We plan to have the team of engineers who developed this product present it at the “LINE Developer Meetup in Fukuoka #17” on February 23. 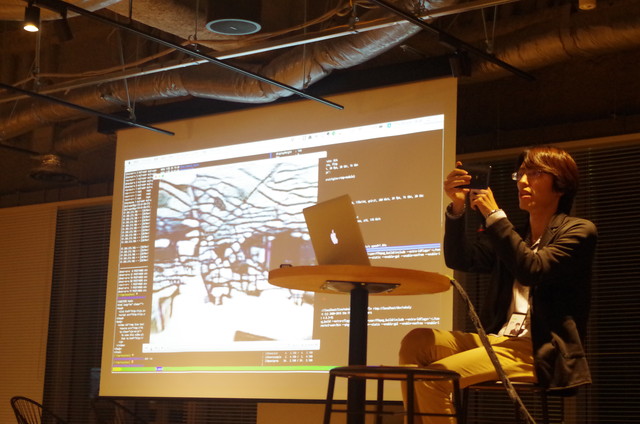 ※MVP Presentations: StyleTransferNet for RealTime
The “Radicon VR” was also really interesting. This MVP used a camera attached to a radio controlled car connected to raspberry pi, giving the user the VR experience of actually riding in the car. The team also developed a remote control that allows the user to operate the car from their smartphone. 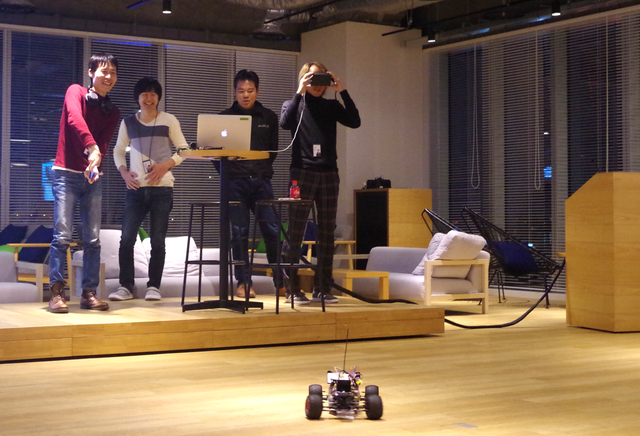 ※MVP Presentations: Radicon VR
An example of something that we actually use in-house was “Shuffle Lunch”. As the name suggests, this program shuffles the names of team members that want to go out to lunch, so we added this “Shuffle Lunch” bot to a LINE group and had it send out a “Join / Pass” message at 12 P.M. It gathered the responses and at 12:50 sent out a message to the LINE group, breaking participants into groups of four. It was fun and exciting for all of us to guess who our lunch group members for that day would be! 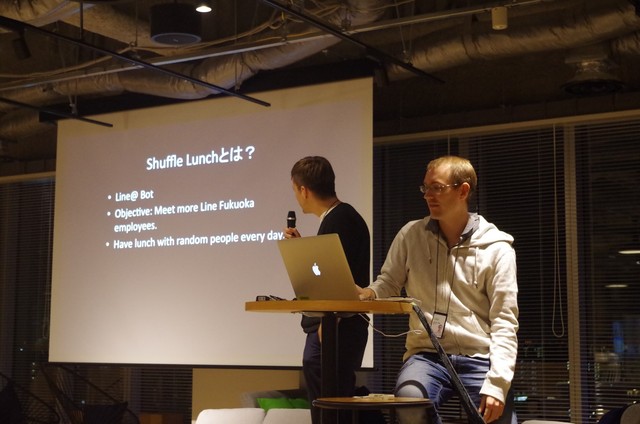 The code used in the Hackathon was (aside from in-house code) basically disclosable. Engineers could release it externally on their personal accounts or create it themselves.
Since all of the final products were technically created during working hours, we could have insisted that they remain the company’s IP, but the goal of this hackathon was purely for everyone to create a product under time constraints and enjoy taking on the challenge of new tech that they were interested in; as long as final products achieved these goals, I didn’t feel that the question of whether to treat them as closed source or open source was that big of an issue. While we weren’t free to release everything, there were cases in which we released versatile portions of actual project code externally as open source. Besides, I feel that the experience of participating in the Hackathon should be more valuable than the final products themselves.
Growth is not something we cause others to do, but something we attain on our own. I believe that the growth of each individual engineer leads to the growth of the company, and as a company, what we can do is create an environment and opportunities to facilitate this growth. 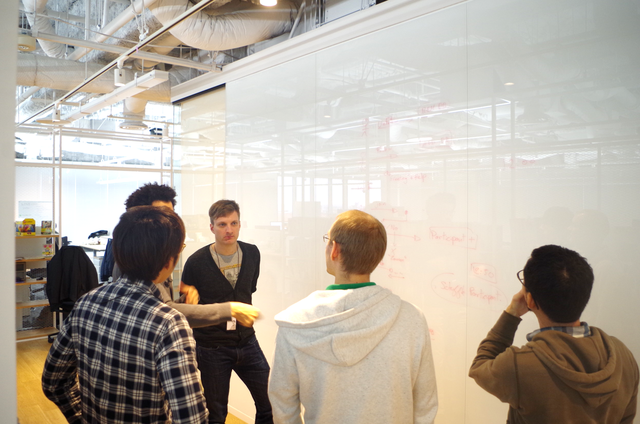 ※During the Hackathon ③
I actually heard engineers saying that the Hackathon gave them an opportunity to take on the challenge of testing out new tech, or that they were glad that they got a clearer sense (compared to their usual work) of a development approach that restricted the features they should implement as well as the amount of time in which they had to complete it. I hope this kind of hackathon will help contribute (even if only a little!) to getting our engineers excited about technology or improving their developmental proficiency.
Finally, the response to the Hackathon was very positive, so I would like to conduct one every year. In the future, I expect it to become a good personal training ground as well as a chance for our engineers to get to know their coworkers’ technological capabilities and strong suits, creating an even better synergistic effect. 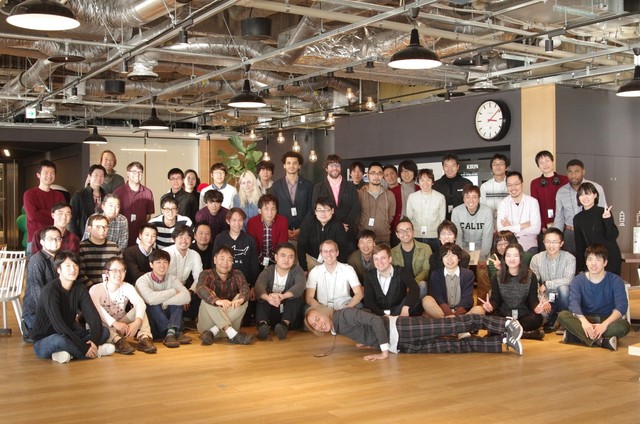 In this interview, we introduced just one of the many engineers who are actually creating LINE services through lens of the Hackathon held here at LINE Fukuoka.
Incidentally, engineer / technology exchange workshops called “LINE Engineer Meetups” are periodically held at LINE Fukuoka. We plan to have the team of engineers that actually produced the “StyleTransferNet for RealTime” technology introduced in this interview speak at the next Meetup on Thursday, February 23. We hope to see you there!
Details: https://connpass.com/event/49575/
We also send out a variety of notices on LINE Fukuoka's official site, so be sure to register (“follow”) us!
▼ Official Accounts
Official Twitter Account
Official Facebook Page
Corporate Homepage
Official LINE Account  （LINE ID:@linefukuoka）